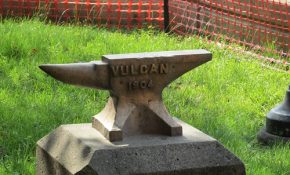 Vulcan – or his Greek counterpart, Hephaistos – was the Greek god of fire and metalworking. According to legend, his forge was under Mt. Aetna on Sicily. What then is an anvil marked “Vulcan 1904” doing in front of the Electrical Engineering and Computer Science Building on North Campus? An engineering honors society on campus known as the “Vulcans” goes back all the way to the turn of the twentieth century – and they take their connection to the Greco-Roman fire god very seriously. In fact, there is photographic evidence from the 1950s of the society’s initiates bearing chains and torches on the Diag while covered in tar. That was back when their altar-like anvil stood near West Hall before it was transferred to North Campus when the College of Engineering moved in the 1980s. Now the anvil stands as a manifestation of the society’s long-standing presence in University of Michigan lore.