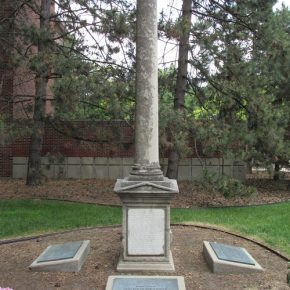 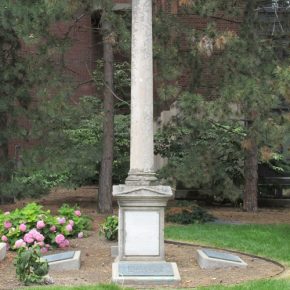 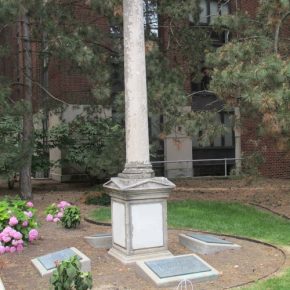 There is a half-broken column that stands upon a small pedestal at the southeast corner of Hatcher Library. It is not very high. Nor is it very wide. It has not always been in its current place, either, having moved much throughout its history. But this monument has been a part of the U-M campus for nearly its entire existence and is the second oldest structure on campus after the President’s House. Erected in 1846 as a cenotaph (which is from the Ancient Greek for “empty grave”) to memorialize Joseph Whiting, who was a Professor of Latin and Greek, the Professor’s Monument as it would come to be called later acquired three more plaques for Professors Douglass Houghton (Geology), Charles Fox (Agriculture), and Samuel Denton (Medicine). The monument interestingly uses the idea of a ruin from Greco-Roman antiquity to symbolize the premature deaths of some of its earliest professors. Ironically perhaps the Latin text of the inscriptions has been worn down to such an extent that it has become increasingly hard to read, rendering the monument an authentic ruin of sorts as it wears the ravages of time on its limestone surface.