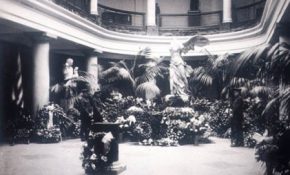 The Winged Victory (or “Nike” in Greek) of Samothrace is one of the most famous pieces of statuary to survive from the ancient world and currently stands in the Louvre today. Although one might mistake it for a headless angel, the statue embodies many of the ideals of Hellenistic art (2nd century BCE), notably in its flowing drapery and dramatic pose, both of which suggest the goddess is in movement. What then was it doing in Alumni Memorial Hall in the 1920s? Charles Lang Freer, a well-known art collector in Michigan, commissioned a plaster cast copy of the ancient statue and donated it the University in 1920. It was originally placed in Alumni Memorial Hall, where it stood for eight years before being moved to the University High School. The Winged Victory copy then graced the halls of the high school with its presence until the 1960s, when the building became the current School of Education. What happened to this majestic statue after its removal is unknown. Could she be buried in the basement of one the buildings on campus, waiting for the day when her would once again feel the air under her wings, standing proud as passers-by stand in awe of her beauty? Her whereabouts remain a mystery to this day, but she is certainly not forgotten.