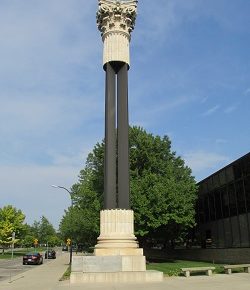 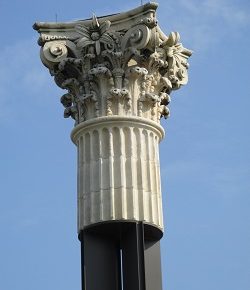 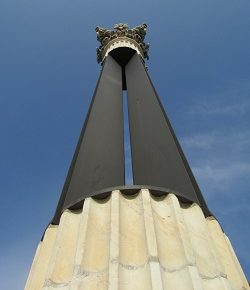 The influential architectural theorist Charles Jencks once wrote that “Modern architecture suffered from elitism. Post-Modernism is trying to get over that elitism not by dropping it, but rather by extending the language of architecture in many different ways – into the vernacular, towards tradition and the commercial slang of the street.” Jencks could perhaps not have found a better example to illustrate his understanding of post-modern architecture than Lorch Column, which stands in front of the Taubman College of Architecture + Urban Planning on North Campus to mark its centennial. The column combines two codes – the neoclassical ornamentation of the past and a steel skeleton of the present – in a way that disrupts both but also brings them together to create a single standing structure. A dialogue is created between the two modes, or rather an argument, which leads not to disharmony (or deconstruction) but to a synthesis of the two sides to create something new and stable. And so it is that the once truncated neoclassical column that used to stand in the courtyard of Lorch Hall (and was brought to campus by Emil Lorch himself in the 1930s) can now reach its full height of 55 feet tall through the use of modern architectural technology.