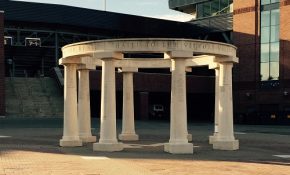 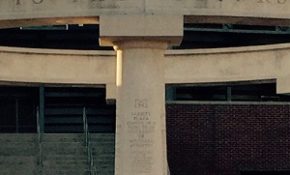 Right inside of the southeast entrance to Michigan Stadium (a.k.a. the Big House) stands a circular structure held up by eight Doric-like columns. This “colonnade” (as it has been come to be called) is a tribute to the unity and continuity between and among different generations of U-M student athletes. Each column is inscribed with the conference and nationals titles that have been won by Michigan teams over the existence of its athletic programs. The first words of the Michigan fight song are also etched into the circular crown that lies atop the columns.