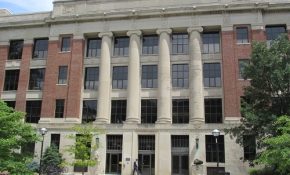 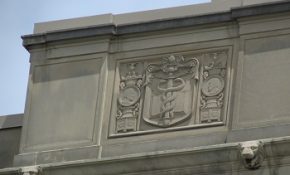 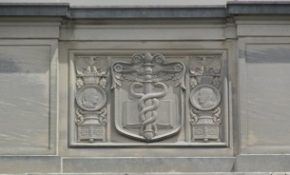 The 1100 North University Building (Central Campus Transit Center) built in 1925 is located on the eastern side of the Diag and displays a limestone neoclassical facade with four Ionic-inspired columns designed by Albert Kahn. The facade has two bas reliefs on its entablature on either side that depict a caduceus, an ancient symbol associated with the Greek god Hermes that in modern times has come to signify medicine and health care. (Although the building now houses many departments of the Natural Sciences, it originally served as a medical building.) These reliefs were carved by Ulysses Ricci, who also worked with Kahn on Angell Hall, among other buildings. The use of neoclassical features in the 1100 North University Building is more subtle than that of Angell Hall but no less effective at delineating the entrance of the building in a way that unites old and new architectural style as Kahn was famous for doing.