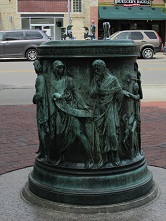 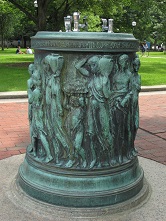 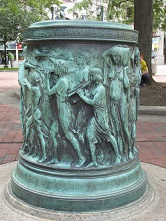 Near the corner of State Street and North University Avenue stands a cylindrical water fountain of bronze that was created with the funds of Mayor Francis M. Hamilton (1905–1907), a U-M graduate who wanted to honor both his city and his university. It was designed by Albin Polásek, who was a famous sculptor and had trained at the American Academy in Rome. It should be no surprise, then, to find that the figures circling the fountain’s base are dressed in typical classical garb in imitation (some say) of the famous frieze on the Parthenon in Athens (a replica of parts of which can now be found on the second floor of Hatcher Library). According to Polásek himself, it was his “aim to make something dignified.” And as with much artwork and architecture of the early twentieth century, classically inspired art was the “dignified” mode par excellence.